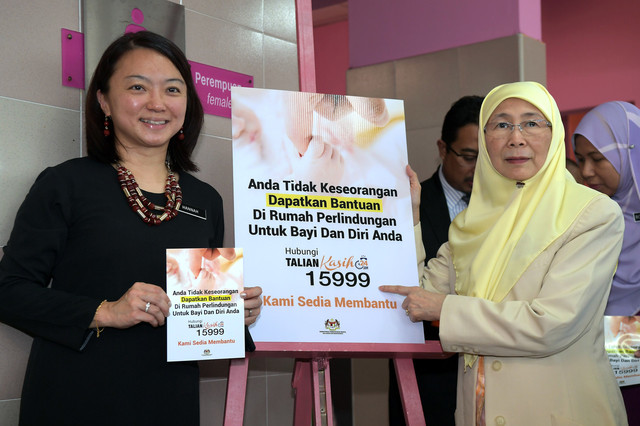 She said 577 cases of baby dumping were recorded in the four years up to 2018 and among the causes were out-of-wedlock and teen pregnancies.

Launching the campaign at the Dengkil (southbound) rest area of the North-South Expressway here, she advised teens or women who have gone astray not to do anything that can endanger their lives or the babies they carry.

“We focus on the safety, health and welfare of both baby and mother,” she said.

The Women, Family and Community Development Minister said they can contact the Kasih 15999 line to seek help and that the ministry has qualified counsellors to handle such cases, including assisting and providing them protection.

She said the ministry, through the Social Welfare Department, also provides shelter for teens and women with out-of-wedlock pregnancies.

Dr Wan Azizah said the ministry is also working with the Royal Malaysia Police to implement locality mapping and strategic intervention in areas identified as hotspots for baby dumping.

On the campaign launched today, she said the initiative undertaken jointly with PLUS will see stickers and posters put up at strategic locations, including on toilet doors, at all the 22 rest areas of the North-South Expressway.

Deputy Women, Family and Community Development Minister Hannah Yeoh, who was also present at the launch, said the initiative is the latest approach of the ministry to convey the message to the people, taking into consideration that about 1.6 million people use the rest areas daily.

She said the ministry planned to expand the initiative in services frequented by the public, such as the Light Rail Transit (LRT) and airports.

Yeoh said that between January and May this year, 65 baby dumping cases were recorded in the country, with Johor having the highest number of 13, followed by Selangor (11) and Kuala Lumpur (seven).

She said 226 cases of baby dumping were recorded in housing estates between 2010 and 2018, the highest number of such cases, followed by 108 cases in toilets and 89 in rubbish dumps.

“In these cases, only 30 per cent of the babies were found alive,” she said. – Bernama