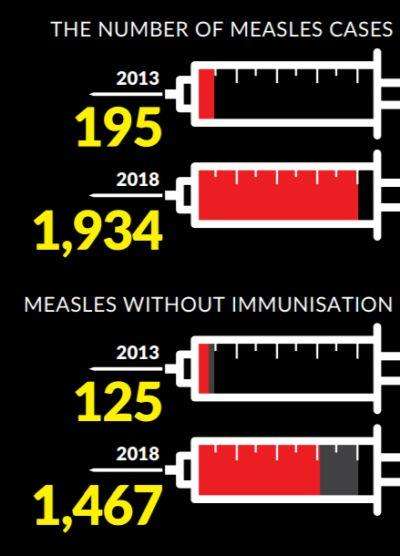 KUALA LUMPUR: Misinformation about vaccines has led to a huge increase in vaccine-preventable diseases, with almost a 1,000% increase in the number of measles cases compared to five years ago.

The number of measles cases jumped from 195 cases in 2013 to 1,934 cases last year, said the Health Ministry in a statement.

Last year, the ministry recorded six measles deaths where all were not immunised, and five cases of diphtheria deaths where four did not receive immunisation.

There were 22 deaths from whooping cough (pertussis) where 19 cases had no vaccination.

Health director-general Datuk Dr Noor Hisham Abdullah said it was discovered through social media that certain individuals who objected to vaccines had influenced other parents to join them.

“The irresponsible action posed a challenge to the ministry’s efforts, and as a result, infectious diseases that could be prevented with vaccines had increased,” he said in the statement.

The World Health Organization has identified vaccine rejection as one of the global health threats for 2019, he added.

Dr Noor Hisham said there were groups and individuals who openly influenced the general public to reject vaccines by spreading unfounded claims.

“The misinformation on vaccination was spread by those obsessed with the claim that vaccination and the National Immunisation Programme carried out by the government were of no benefit and resulted in negative effects. The claim is not accurate,” he said.

However, the numbers dropped a little in 2017 – to 1,404 cases – following the ministry’s widespread advocacy efforts done in collaboration with the private sector and medical social media volunteers, said Dr Noor Hisham.

“If people continue to reject vaccines, there is a likelihood that infectious diseases that could be prevented by vaccines will continue to increase, and all efforts will be futile,” he said.

Dr Noor Hisham said immunisation has been given free to Malaysian babies and children in government clinics since the 1950s.

Currently, the National Immunisation Programme is able to prevent 12 types of infectious diseases caused by certain bacteria and virus, he said.

Immunisation has also eradicated smallpox worldwide while polio had been eradicated in Malaysia, he added.

Those with doubts are advised to get accurate facts from www.myhealth.gov.my, www.infosihat.gov.my and immunise4life.my/ or any health facility.

Children Most At Risk In ‘Pandemic Of The Unvaccinated’
August 20, 2021

SHOULD TEENAGERS AND CHILDREN BE VACCINATED?
August 20, 2021