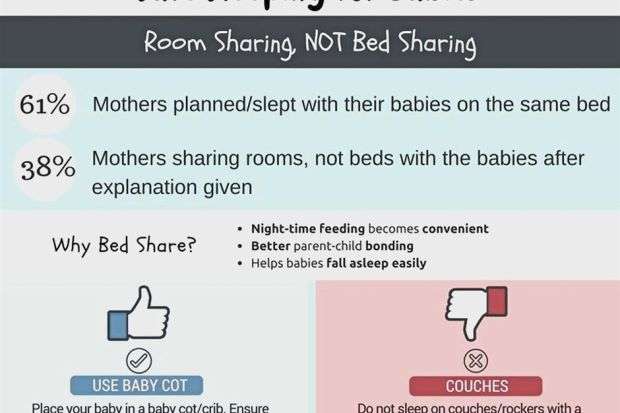 YOUNG children, especially those under five years of age, are “fragile” and vulnerable to many risks. In recent years, we have become increasingly aware that some small children die as a result of suffocation while sleeping with their parents. This is a tragic event and one that can be easily prevented.

As parents need to watch over small children or a mother may have to breastfeed at night, they do need to be close to the child. But sleeping with them in the same bed is hazardous. The key is sharing the room, not the bed; in other words, children should be near us but not in the same bed.

The Clinical Research Centre (CRC) in Perak conducted a study to see how common this behaviour is and if we could advise parents to change their practices. We initially followed up 95 mothers who had just given birth. One week later, we called them to check their family sleeping behaviour. We found that 61% of these parents were sleeping in the same bed as their baby.

We then followed up another group of 95 mothers who had just given birth. This time we asked them their planned sleeping behaviour before they were discharged from the hospital.

Again, 61% said they planned to sleep with their baby in the same bed. We then explained to them the risks of suffocation and advised on sharing the room but not their bed with the baby.

We advised that the baby be placed in a cot beside them, or on a separate mattress on the floor.

One week later, we called them to check their family sleeping behaviour. It was rewarding to note that only 38% of these parents were sleeping in the same bed as their baby. This means that a sizeable number of parents had changed their plans from bed sharing to room sharing.

This was an encouraging change and showed that many parents were not previously aware of the risks of sleeping with their baby in the same bed.

In international data and studies, 15% to 20% of unexplained deaths in young children are attributed to bed sharing.

This is easily prevented, and we hope to communicate this message to the public. The key message for families with young children is “Room Share, Don’t Bed Share”. See educational leaflet above.

We also hope all healthcare professionals who work with pregnant mothers and young children can communicate this important message.

Children are precious. The death of one child due to a parent rolling over or accidentally smothering the little one is a tragedy.

Reproduced From : The Star Online