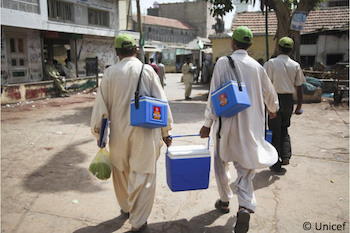 The commitment of polio workers everywhere is a testament to the will of humanity to value and protect the health of every child. As we moved closer to eradication through 2016, this work continues to make a difference in the lives of children, and it remains an ultimate expression of human equity.

This year, we witnessed a historic achievement in the global fight against polio: the lowest case count in recorded history. The confinement of the virus to Afghanistan, Pakistan and Nigeria gives us hope that eradication is within reach. As 2017 approaches, we have the opportunity to reflect on the programme’s recent challenges and successes.

In August, polio cases were reported in Nigeria – the first found in two years – amidst a wider humanitarian crisis. A large-scale regional emergency response was immediately launched, reaching millions of children with polio vaccines to ensure that immunity was rapidly built up. Continued focus on Nigeria is critical in the upcoming year, as we work to find every virus, protect the health of children and achieve widespread vaccine coverage.

The programme also marked a remarkable global achievement earlier this year: during a two-week period in April, countries around the world orchestrated the largest and fastest globally coordinated vaccine project in history. One hundred and fifty five countries and territories switched from trivalent to bivalent oral polio vaccine, offering enhanced protection from the last two strains of polio.

And in January, India – the country once considered the toughest place on earth to stop polio – marked five years since its last case. Maintaining this incredible achievement will require sustained and heightened surveillance and ongoing vaccination efforts; in India and in all countries vulnerable to polio returning.

This year has brought us closer than ever to a polio-free world. In 2017, it will be critical that we continue building on this recent progress and maintain unwavering commitment to the end.

POLIO IN THE NEWS

The Guardian: The forgotten story of Jeff Hall, the footballer whose death turned tide against polio in the UK

Vox: This Thanksgiving, be grateful for these 6 ways the world is getting better