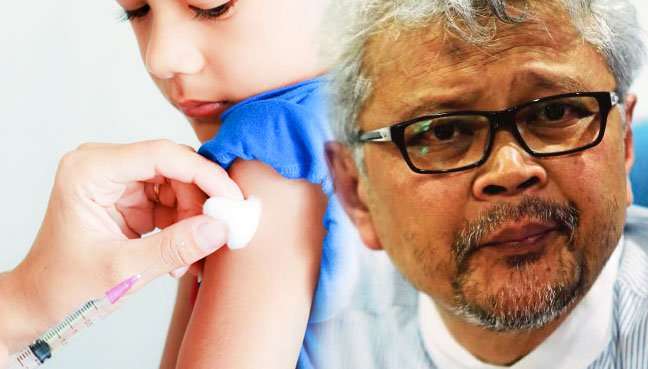 The Greeks (429 BC) first observed that those who survived small pox did not get re-infected (immune memory). Buddhist nuns (900 AD) pounded the smallpox scabs (the antigen which stimulates the immune response) and practised variolation, where healthy people inhaled the powder to prevent against smallpox. Turkish physicians (1700 AD) used variolation to immunise against smallpox. Lady Mary Montague, wife of the British ambassador to Turkey brought the idea to Britain and inspired Edward Jenner’s first small pox vaccine in 1796.

The antigen, either dead or weak germs, stimulates the immune system to make antibodies that bind to the antigens and lead to its destruction.

The immune system also creates a blueprint of the antigen, stored in the body’s immunological memory. If the antigen re-appears, the memory cells immediately trigger the antibodies to target and destroy the antigen.

The vaccinee is thus spared of the nasty effects of the disease, which may lead to physical and intellectual disability, not infrequently death, as he/she has now formed an immunity against the disease and is thus protected, virtually for life.

Immunisation is one of the vital components of the child survival strategy of the World Health Organisation (WHO) and the United Nations Children’s Fund (UNICEF). Every year, 2.5 million deaths are prevented and 750,000 are saved from disabilities from vaccine-preventable diseases.

Towards addressing global equity in child health, if all of the basic vaccines in the WHO Expanded Programme on Immunisation and more of the newer vaccines (e.g. pneumococcal and rotavirus) is made more widely available, there is an opportunity to save another 1.5 million lives and prevent disabilities.

Vaccines are administered to healthy children and adults. Therefore, they are manufactured to meet the most stringent and highest standards of safety. Before they are licensed, global and National Regulatory Authorities (NRA) require evidence of sound research, clinical trials and testing to ensure efficacy and safety, which may take 10-15 years.

However, like any medication, vaccines may cause adverse effects. In the majority of cases, vaccines are effective in protecting the vaccinee from diseases and causes no side effects. A few may experience mild Adverse Effects Following Immunisation (AEFI) e.g. soreness, swelling or redness at the injection site, low grade fever or slight malaise.

In extremely rare circumstances, the vaccinee may experience more serious side effects like allergic reactions. The incidence of this is probably less than 1 in a million.

Among the concerns parents have, are of side effects, both short and long term, as well as the ingredients found in vaccines. Some are genuine concerns about the safety of vaccines. Others, use these issues to manipulate, distort facts and raise alarm on AEFIs and the purported “poisons” in vaccines.

After failing to prove a causal link between autism and vaccines, namely the MMR vaccine, they have targeted the various ingredients used in the making of vaccines.

Many are obviously unaware that the supposed ‘toxins’ found in vaccines are actually found in the environment, the food chain, breast-milk and in infant formula, in much larger quantities.

The next target is the presence of aluminium in vaccines, which is used as an adjuvant to enhance the immune response, thus requiring less antigen to generate protective immunity and fewer shots.

An infant ingests 2X, 40X and 120X more aluminium from breast-milk, cow’s milk and soya milk respectively, than that found in vaccines.

Tested extensively in clinical trials before being licensed, aluminium has been used for many years and has an exemplary safety profile.

Formaldehyde, used in vaccines to kill viruses or deactivate toxins is another target. We are exposed to far more formaldehyde in the environment (auto exhaust, paint, furniture, grocery bags, food etc) than to any vaccine. A 200-gram pear, contains 12,000 micrograms of formaldehyde compared to 100 micrograms (0.83%) found in vaccines.

Misinformation is rife on the Internet, making it very difficult to find accurate and reliable sources of information. In 2003, the UNICEF, WHO and key NGOs initiated the Vaccine Safety Net Project (VSN) to respond promptly, efficiently and scientifically to vaccine safety issues of global importance.

Immunisation is a very common and memorable milestone in a child’s life. As such, all adverse effects are quickly linked to a vaccine as being the cause. Whilst a few reactions may be caused by vaccines, the vast majority are unrelated events that occur by chance or coincidence.

Like autism, the purported association of vaccines with the rise of chronic autoimmune syndromes in children (Law Speak: Crime for not vaccinating your child) have been similarly debunked.

With the advent of the Internet, we are today in a global village where trends from the west are just a Facebook or Twitter share away. The Internet is full of news on vaccines and most people do not check the authenticity of the news they read. Researchers and scientists spend over a decade researching a vaccine to ensure its efficacy and safety, but Internet researchers only take minutes to Google to get instant results.

Webmasters of anti-vaxxers utilise SEO and Google Analytics to ensure their websites or blogs get top rankings in search engines. Most of these sites are either selling something (health supplements, programmes or alternative medicines) or subscribe to the ‘pay-per-click’ online programmes. The vaccination debate is a good way to make money and gain a following fast.

On the other end is another group of parents, as well as those of rural communities who are simply misinformed that vaccines contain haram (non-permissible) contents. When there is an element of was-was (doubt), Muslims begin to shun vaccines, wrongly believing that they are making a better choice for their offspring. This is further fuelled by conservative religious scholars who pass fatwa (religious edicts) which prohibit immunisation and claim that these are part of the western and Zionist ploy to weaken and harm the Muslims.

Virtually all of those infected with measles in the US Disneyland outbreak in 2015 were unvaccinated children. The index case was a child of anti-vaccine parents, who acquired measles in Disneyland. It spread to other children in 20 states in the US, spread north to Canada and south to infect children in Mexico. This was a major setback to the immunisation programme in the US which has been measles-free since 2000.

The Ministry of Health Malaysia reported 1,402 cases of measles in 2015 compared to 235 cases in 2014. The cases of whooping cough increased to 497 and 789 in 2014 and 2015 respectively. Neonatal tetanus doubled from nine cases in 2014 to 16 cases in 2015. The recent outbreak of diphtheria resulted in six deaths. Most of these vaccine preventable diseases occurred in unvaccinated children of parents who refuse vaccinations.

Any medical intervention is bound to be associated with some degree of risks. The potential adverse effects of immunisation must be carefully weighed against the numerous individual, societal and economic benefits accrued from the WHO’s Expanded Programme of Immunisation.

It is not logical to avoid any form of medical intervention solely because one wants to avoid risks. This paradigm of thought which is propagated by the anti-vaccine groups is incoherent and irrational because doing nothing is also associated with risks, namely the increased risk of acquiring vaccine-preventable diseases which can lead to outbreaks of diseases, increased and prolonged hospitalisation, increased utilisation of expensive treatment, increased deaths, and increased physical and intellectual disabilities.

Another important moral consideration is to ensure that the individual choices one makes does not harm others. The risk of the unvaccinated child getting pertussis, chicken pox or measles is six-35 times higher. Therefore, they might pass the infection to others, who may be harmed. Freedom of choice is a good thing but the freedom to harm others is not.

Dr Musa Mohd Nordin is Consultant Paediatrician & Neonatologist; Treasurer of the Malaysian Paediatric Association; and board member of Immunise4Life (immunise4life.my).