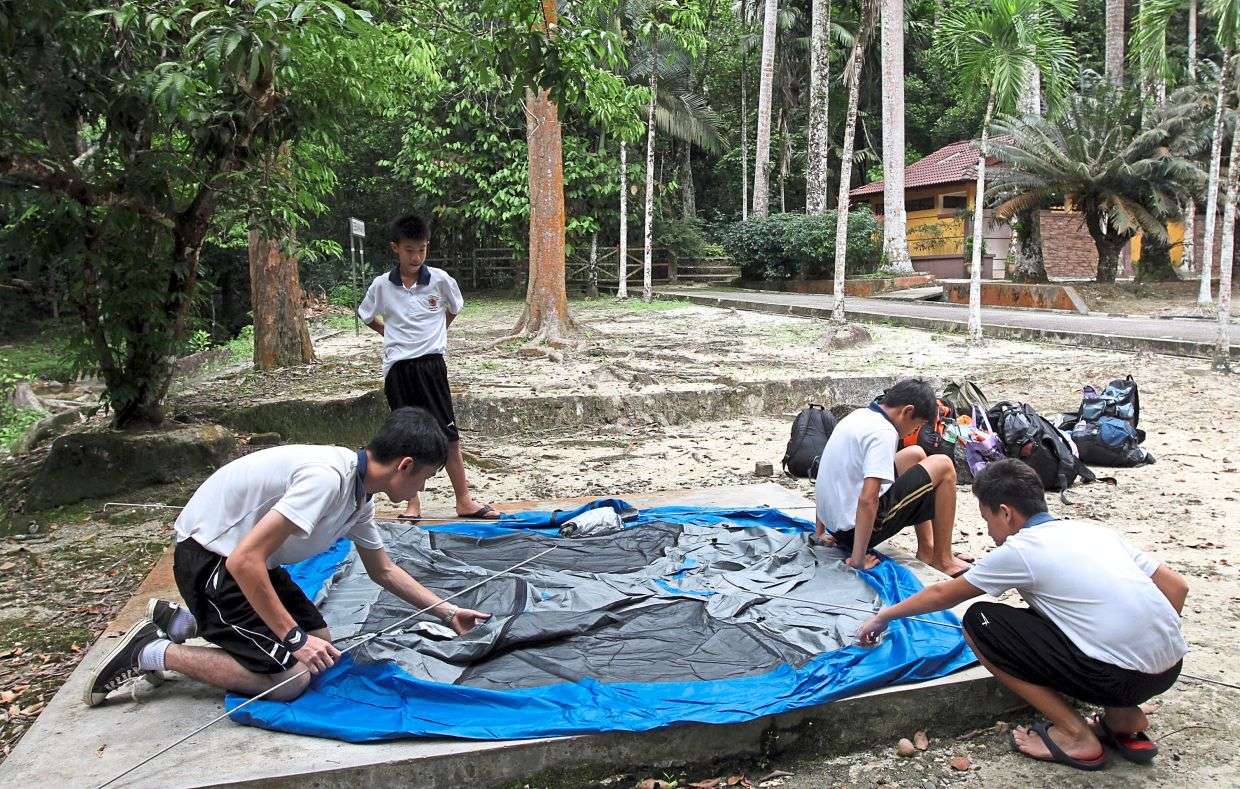 Seeing children play traditional games is uncommon these days as more often than not, the young ones are glued to electronic devices.

Some have probably never even heard of games such as lompat getah, galah panjang or batu seremban.

However, some parents believe such games are an important part of childhood and a way to encourage children to stay active.

For instance, housewife N. Devika, 44, has decided that she is not going to allow her two daughters to play with just electronic gadgets, but also teach them the fun outdoor games she used to play as a child.

“When I was a little girl growing up in Penang, I used to play hopscotch, batu tujuh and lompat getah.

“Board games such as snakes and ladders, ludo and chess as well as congkak used to be my favourite, ” she said, as daughters Rhea and Dheana played on their house porch.

pick up a pebble on the ground, doing her best not to step out

of a hopscotch box drawn by her older sister.

Dheana, 13, routinely drew lines on the floor with chalk in the evenings for both of them to play hopscotch.

“Look Dheana, I have learned how to balance, ” said Rhea proudly, who was then applauded by her sister.

She said that when the girls were younger, they enjoyed playing masak-masak (pretend play at cooking).

“Of course, the children’s kitchen utensil sets being sold these days are nicer and more realistic.

“When I was younger, my mum bought me a set from a sundry shop nearby and told me that if I ever broke it, I would not get any new ones, ” she recalled.

She said although her daughter was allowed to use a tablet for less than an hour a day, she frequently took her four-year-old to a playground nearby so she could just run, play on the swing and catch butterflies.

As her daughter really likes animals, Amirah makes it a point to take Khayla to a petting zoo when she has the time.

“I even got her a hamster as a pet and we both try to make its ‘home’ nicer using recyclable items.

“Besides that, she has a kitchen play set. I provide her with cherry tomatoes and other vegetables, and she churns out ‘dishes’ for me.

“I really prefer her to play outdoors, just like I did as a child, ” she said.

Every evening, she said, he would play with a few neighbourhood friends for at least two hours.

“They would cycle and just play catch, badminton or hide-and-seek and come home drenched in sweat.

“It is good that they are not just sitting down and looking at gadgets or playing virtual games for long hours, ” she added.

Simran said falling down, getting minor injuries and crying were all part of the childhood experience.

“Having arguments with friends and being best friends again five minutes later are part of the growing up process as well, ” she highlighted.

Meanwhile, marketing representative Lay Fong May, 45, tries to encourage her daughters, aged 13 and 10, to play traditional games like congkak and marbles at home, but they get bored after just a few minutes.

“They like hopscotch, hide-and-seek, badminton and cycling though, ” she said.

“I am thankful that they like some outdoor activities and I encourage them to do at least one activity every evening.

“It is always better for them to be physically active than to be glued to a device for hours, which can affect their eyesight and posture, ” she added.

He noted that children derived pleasure from the visual and auditory stimulation provided by the gadgets.

“Unfortunately, constant and overstimulation lead to only certain parts of the brain being developed and other areas being neglected.

“This is unnatural and promotes a very sedentary childhood and adulthood, ” he added.

Dr Khoo said the natural world provided enough stimulus to develop a child fully, and in impoverished countries without access to technology, children would grow up to become intelligent adults, as did children of the past.

He pointed out that traditional games fostered cooperation and teamwork, and was exciting enough for several children to play together in a short span of time.

“Children often make do with rubber bands, bottle caps and even erasers to come up with simple games.

“One is never inactive playing such games as it requires mobility and action.

“So, such activities are excellent for children in kindergarten and primary school, ” he added.

The human nervous system, Dr Khoo said, was not a machine, as it did not store knowledge, pictures or upgrades like a computer or mobile phone.

He highlighted that the dictum “use it or lose it” applied to the human brain, explaining that if children did not learn to swim or ride a bicycle when they were young, they would have to train harder to achieve the same level as someone who started at a younger age.

He noted that sensory processing disorders were on the rise in children and many studies had linked this increase to overuse of gadgets that provide only input to the brain, without much output.

“Children also become more self-centred, self-absorbed and anti-social when they are solely on their gadgets.

“This is a worrying trend as these children grow up disconnected from the real world and find it difficult to cope with real relationships.

“They also become stressed and are unable to cope, which can lead to much avoidable medical and mental illness, ” he added.

He noted that children in the current era were surrounded with gadgets and some were addicted to them.

“Though educational gadgets have some benefits, it should not become an essential part of a child’s life.

“Children need to engage in the good old physical activities to stay physically and mentally healthy, ” he added.

Dr Thiyagar recalled an elderly neighbour who once told him many years ago that “to a child, the whole world is a playground” and this succinctly emphasised the importance of outdoor activities.

He said children should indulge in at least 60 minutes of physical activity daily and it could be in the form of organised traditional games, fun pretend play, skipping, cycling or just jumping around.

“Not only does such activities keep them fit and healthy, they also teach them leadership skills and empathy as well as foster other social skills.

“It enhances their cognitive development and in the long run, it prevents childhood obesity too, ” he added.

Dr Thiyagar said parents should set a good example by keeping gadgets aside at home and setting rules on their usage in the house.

“Limit your child’s time spent on gadgets, especially if they are less than five years old, ” he added.