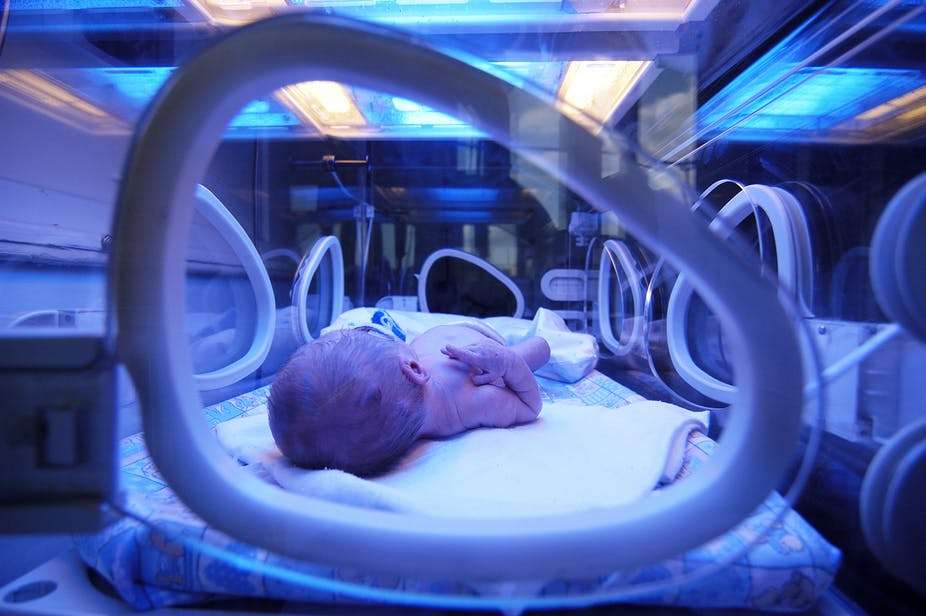 In newborn babies, jaundice is so common as to be termed physiological. It affects around 60% of term babies and around 80% of preterm babies in the first week of their lives. Clinicians need to monitor it carefully and sometimes treat it, since it can lead to conditions like acute bilirubin encephalopathy and kernicterus that can damage the infant’s brain and cause developmental problems.

But it now looks as though this jaundice is not merely one of the pitfalls of entering the world. New research just published in Scientific Reports, in which we have been involved, suggests that it is one of the gifts of evolution. Humans may develop jaundice as newborns to protect from something even more serious: sepsis.

When most people think of jaundice, they probably think of yellow skin. This is caused by too much of an orange-yellow pigment known as bilirubin in the blood. Bilirubin is released when old red blood cells are being broken down.

Normally it travels to the liver to be converted into a water-soluble form before being excreted in both faeces and urine, but this process can go awry when there has been some upset to the liver that prevents it doing its job properly. In adults, this can be a sign of underlying conditions ranging from hepatitis to alcoholic cirrhosis.

With newborns, the situation is slightly different: the body needs to make the transition from fetal to adult blood, but the liver does not yet have the capacity to cope with the bilirubin released in the turnover of red blood cells. The resulting jaundice usually passes uneventfully.

The risk of complications like encephalopathy and kernicterus comes when the bilirubin circulates in high levels for prolonged periods, enabling it to cross the blood-brain barrier and deposit deep within the brain. As a result, neonatologists treat high bilirubin levels with blue and white light phototherapy lamps, which convert the bilirubin into a more water-soluble form – temporarily doing the liver’s job. Complications are now thankfully extremely rare as a result – at least in wealthy countries. 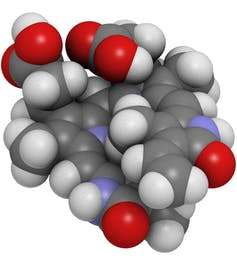 In this lies a mystery: why have humans not evolved to overcome this temporary bilirubin problem? Richard started wondering about this when he was doing his PhD in gut microbiology at the University of Aberdeen, while regularly working on call at the neonatal unit as a registrar at the city’s maternity hospital.

One night he was looking after a baby boy who had sepsis, which is where the immune system goes into overdrive to protect against infection, potentially leading to severe inflammation, organ failure and death. This baby was profoundly unwell in intensive care, suffering from inflammation and a strikingly high bilirubin count that was only just being controlled with three phototherapy lamps. Usually this kind of difficult jaundice is caused by an immune reaction between mum’s and baby’s blood groups, but not in this case.

Richard began wondering if the bilirubin was directly linked to the infection, and if it was part of the baby’s body’s attempt to clear the sepsis (in this case the baby survived). He started thinking about the problem in evolutionary terms – if jaundice can harm the baby, what benefit does it offer to balance this?

Looking at the literature, most people were talking about the fact that bilirubin has antioxidant effects that might counteract oxidative stresscaused by birth. But the timing looked unconvincing: when jaundice develops in most babies, the highly oxidant process of being born is usually at least 24 hours in the past.

Thinking about babies in caves in days gone by, with no healthcare and certainly no antibiotics, Richard realised that the biggest threat to their life after surviving delivery would probably be overwhelming sepsis in the first few days – exactly when the bilirubin level rises naturally. Could jaundice be an evolutionary mechanism to protect against this?

Richard got to work with an 11-strong team at the University of Aberdeen and NHS Grampian, recruiting a willing medical student to spend his summer holiday working with blood plates, bilirubin and bacteria grown originally from neonatal blood cultures taken from septic babies.

Some early signals supporting the hypothesis first emerged in 2009 when the team found that bilirubin seemed to impact the growth of the bacteria that most commonly causes early sepsis in babies, Gram-positive Streptococcus agalactiae. With other bacteria implicated in sepsis, the results were mixed: bilirubin also affected some types of Staphylococci, but not Gram-negative Escherichia coli.

It was enough to secure a PhD grant from the Medical Research Council and develop ideas further. This went to Sophie Gibson, who developed a new liquid culture system to test the hypothesis further and look at the direct impact on the bacteria.

The results of this project have just been published. Our team have shown that even modest concentrations of bilirubin reduced by one third the growth of Gram-positive Streptococcus agalactiae. We also showed that bilirubin may alter substrate metabolism in the bacteria.

In short, it looks like the hypothesis is bearing out. We now need to do more work, probably in animal experiments of sepsis. This will enable us to think about whether clinicians should raise the accepted bilirubin threshold for babies at risk of sepsis – those born prematurely, for example.

It feels like we’re discovering something new about the physiology of newborn babies. It’s the excitement of being a clinician scientist: taking an idea from a real patient into the laboratory and testing then developing it to hopefully help future patients. When newborn babies develop jaundice in future, we’ll still need to treat it carefully. But quite possibly we will also be thankful that it’s protecting them from something potentially life-threatening.