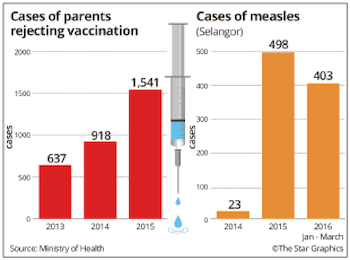 CYBERJAYA: A radical move to provide free vaccination for all children under five, including migrants and refugees, is being mulled by the Health Ministry.

Selangor Health director Datuk Dr Zailan Adnan said the plan, which would involve providing all vaccines listed under the National Vaccination Programme, has been discussed at high-level technical group meetings which felt this would be the best approach.

“It is still at the proposal stage,” she said, adding that if implemented, it would cost the Government about RM10mil annually.

“Those under five are in the vulnerable group and whether they are foreigners or not, they should not be denied good health including vaccination,” she said during a forum entitled “Vaccination, Is It Really Safe” at the Cyberjaya University College of Medical Sciences.

Dr Zailan pointed out that if more people were immunised, then the outbreak of preventable diseases was less likely.

The ministry, she said, was closely monitoring the situation in Kedah, which saw the last reported case of diphtheria on Saturday.

The five-year-old victim from Kulim is in intensive care.

“It is extremely important,” he said.

He added that he hoped the proposal would be approved as soon as possible.

He pointed out that the refugee communities here had zero vaccination coverage and could be the epicentre of an outbreak.

“Unless you vaccinate them, they will be a reservoir for infection and they will pass it on to local children,” he said.

Dr Musa said the proposal could mean achieving herd immunity, where between 90% and 95% of the population is vaccinated.

He said this would also protect the few who cannot be vaccinated, such as those who are too young to be vaccinated and those who had cancer, leukaemia, HIV or were on steroids and other cancer drugs.

The expanded immunisation programme by the World Health Organisation and Unicef is a powerful child survival strategy.

“It saves 2.5 million lives a year and saved 750,000 children from becoming physically or intellectually disabled,” he said.

The use of newer vaccines, he said, could potentially save another 2.5 million lives and “that’s amazing”.

“Come talk to us, don’t just assume, don’t just Google or talk to your friends who may not know what they are talking about,” he said.

In Kota Kinabalu, Sabah Health Department director Christina Rundi said there was no need for a specific programme to provide vaccinations for children of migrant communities among whom sporadic cases of diphtheria have been detected.

She said they could either go to the government or private clinics to obtain such vaccinations though it would involve some cost.

Selfish of parents not to get children immunised

These articles were first published in The Star Online on 4 July 2016.