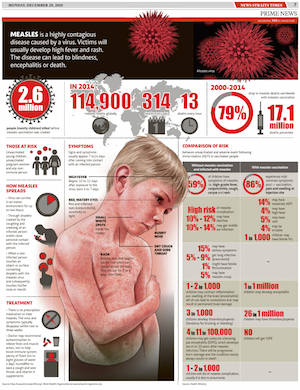 KUALA LUMPUR: Babies will be vaccinated for measles as early as 9 months effective from April following a sharp rise in the number of measles cases in the country.

Health deputy director-general (Public Health) Datuk Dr Lokman Hakim Sulaiman said the Health Ministry would bring forward the first dose of measles–mumps– rubella (MMR) vaccination to 9 months and second dose to 12 months, from the current 12 months and 7 years. The move, he said, was timely and necessary as measles was still endemic in Malaysia, indicated by the increase in the number of cases and clusters in the past three years.

“Beginning next year, babies in the peninsula and Sarawak will get their first MMR shot at 9 months, and the second dose at 12 months.

“For babies in Sabah, they will continue to receive measles vaccination at 6 months. But, they will receive their first MMR dose at 9 months and second dose at 12 months. The new schedule will start with babies born on July 1, 2015, onwards,” he told the New Straits Times.

Dr Lokman said this would provide sufficient time for medical personnel to inform parents on the new schedule, set new appointments for MMR shots and acquire a sufficient supply of vaccines.

“We will also carry out campaigns on the new vaccination schedule to create awareness and educate the public. This has been discussed with the ministry’s Family Health Development Division and state health personnel.”

Dr Noor Hisham said the number of outbreaks increased more than threefold, with 37 episodes from only 11 last year, with cases had been reported in childcare institutions, schools and detention centres.

Immunising infants before the age of 6 months often failed to induce seroconversion due to the immaturity of the immune system and the presence of neutralising maternal antibodies, said Dr Lokman.

Seroconversion is the time period during which a specific antibody develops and becomes detectable in the blood.

In measles-endemic countries, he said, the vaccine was best given at 8 to 9 months, which would have a seroconversion rate of between 82 per cent and 95 per cent (with an average of 85 per cent).

Administering the second dose in the second year of life would give 99 per cent seroconversion.

Measles is a virus that lives in the nose and throat mucus of an infected person. It develops into a highly infectious disease that occurs only in humans.

Dr Lokman said measles was highly transmissable in the pre-vaccination era as, if even one person had it, 90 per cent of the people close to that person who were not immune to the virus would also be infected.

“The incubation period, the interval from the time when the virus enters the body to the appearance of the first symptom, is between seven and 10 days.

“Three to four days later, the patient will develop rashes. They are contagious from about four days before eruption of the rash until four days after eruption.”

Dr Lokman said a dose of measles vaccination would provide lifelong immunity, adding the second dose of vaccination was to ensure seroconversion could take place in cases where it did not happen with the first dose.

“Measles vaccines contain a live attenuated (weakened) measles virus. It is available either as a monovalent vaccine (stand-alone vaccine) or in combination with other viruses, such as rubella, mumps or varicella vaccines.

“The combined vaccines available in the market are measles–rubella (MR), MMR vaccine, or measles–mumps–rubella–varicella (MMRV) vaccine. These vaccines are safe and effective.”

Dr Lokman said areas that failed to maintain high measles vaccination coverage would result in a resurgence of the disease. About 90 to 95 per cent of the population must be vaccinated to protect the entire population and achieve what is known as “herd immunity”.

Although natural measles infection could provide lifelong immunity to the virus, he said the risk of severe complications from the disease were high, especially for those 5 years and below, as well as those with immunological disorders, living in overcrowded conditions and were malnourished.

“In developing countries, persistent diarrhoea may occur, particularly in infants. Post-infectious measles encephalitis occurs in about one in 1,000 cases.

“Subacute sclerosing panencephalitis, a slowly progressing infection of the central nervous system, occurs in about one in 10,000 to one in 100,000 cases.”

This article was first published in NST on 28 December 2015.