Doctors say move is based on sound science 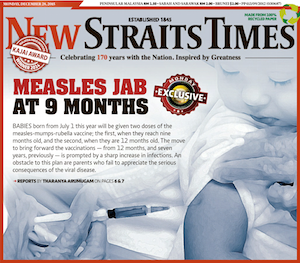 KUALA LUMPUR: The move by the Health Ministry to change its measles vaccination schedule is welcomed by medical experts.

He said it was necessary because infants and children were more susceptible to diseases as they had not developed the antibodies against certain viruses.

“A high coverage rate of between 90 and 95 per cent is needed for herd immunity. This way, even people who cannot get vaccinated due to allergies or immune deficiencies will be protected,” he told the New Straits Times.

“In developed countries, children are given the MMR at 12 to 15 months. This is because of good uptake (more than 90 per cent) of measles immunisation among the population.

“With our the increasing number of measles cases, such a practice will not work here. If we wait for the babies to turn 12 months, many of them are likely to develop measles even before that.

“Once we have achieved a higher coverage of measles vaccination, the incidence of measles will become much less.”

Dr Musa said most recent cases were reported in urban areas, notably in the Klang Valley and pockets of communities in rural areas.

This, he said, was largely prevalent among those who were unvaccinated or received only one dose of immunisation, as well as those opting for alternative medicine, such as homeopathy or naturopathy. There were also cases where parents did not believe in the benefits of vaccination or forgot to give immunisation to their babies.

He said many parents failed to see the severity of the complications from measles. Measles could cause severe lung infection (pneumonia), brain inflammation (sub-acute sclerosing panencephalitis) and blindness. One death per 1,000 cases have been reported so far.

“With the refusal of the vaccine, it also means there is a potential for an increase in cases of mumps, which, prior to the inclusion of MMR in the National Immunisation Programme, was the leading cause of viral meningitis and deafness, and can lead to sub-fertility in males and miscarriages in females.

“And if girls go into pregnancy without getting the immunisation for rubella, their babies may have Congenital Rubella Syndrome, which causes deafness, cataracts, mental retardation and congenital heart disease.”

The reproduction number indicates the number of secondary cases that one infected person could cause in a susceptible population.

“Measles, with an estimated reproduction number of 12 to 18, is so contagious that if one person has it, 90 per cent of the people close to the person who is not immunised will also become infected.”

Vaccines, he said, acted like barriers to the transmission of diseases.

In measles, an estimated range of 83 per cent to 95 per cent of the population should be immunised to achieve a herd immunity.

In a bid to ensure parents vaccinate their children, the Health Ministry had earlier told the NST that it was mulling making vaccination mandatory.

The ministry is also drawing up plans to ensure children are vaccinated and protected against vaccine-preventable diseases and would engage relevant agencies to execute this.

This article was first published in NST on 28 December 2015.