Children in an Urban world : State of the World’s Children 2012 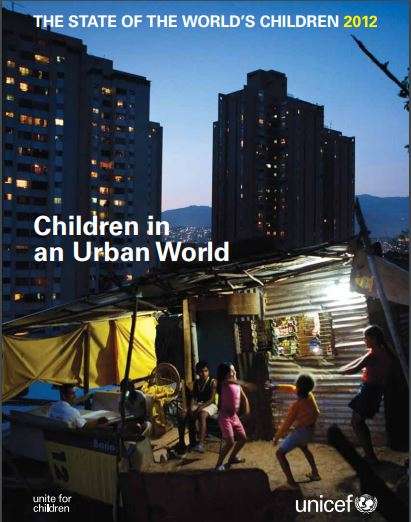 The day is coming when the majority of the world’s children will grow up in cities and towns. Already, half of all people live in urban areas. By mid-century, over two thirds of the global population will call these places home. This report focuses on the children – more than one billion and counting – who live in urban settings around the world.

Urban areas offer great potential to secure children’s rights and accelerate progress towards the Millennium Development Goals (MDGs). Cities attract and generate wealth, jobs and investment, and are therefore associated with economic development. The more urban a country, the more likely it is to have higher incomes and stronger institutions.1 Children in urban areas are often better off than their rural counterparts thanks to higher standards of health, protection, education and sanitation. But urban advances have been uneven, and millions of children in marginalized urban settings confront daily challenges and deprivations of their rights.

Traditionally, when children’s well-being is assessed, a comparison is drawn between the indicators for children in rural areas and those in urban settings. As expected, urban results tend to be better, whether in terms of the proportion of children reaching their first or fifth birthday, going to school or gaining access to improved sanitation. But these comparisons rest on aggregate figures in which the hardships endured by poorer urban children are obscured by the wealth of communities elsewhere in the city.