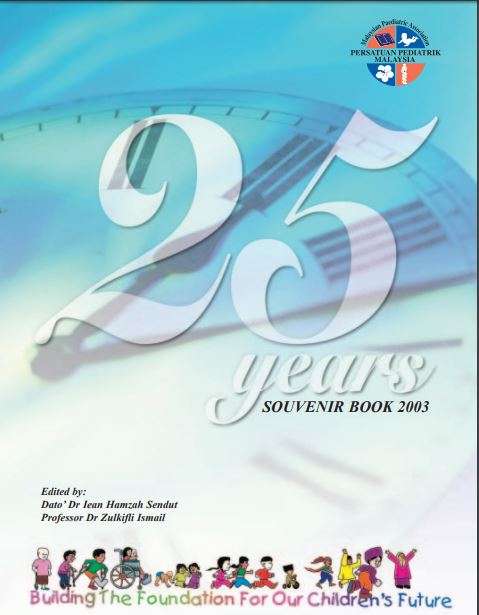 Much has been achieved in the last 25 years. The MPA has matured into an association whose membership has increased in strength from a mere handful of paediatricians 25 years ago to nearly 400 members. The Annual Scientific Congress , the highlight of the activity of MPA, registers increasing number of participants every year. The quality of the scientific sessions and the free papers have continued to improve annually.

Even the venue has changed, from the humble lecture halls of UKM to the Marriot of Putrajaya. Due to uncertainties and difficulties brought on by the SARS epidemic, a few of our planned activities has to be put on hold. However the Pediatric Rendezvous in Lumut , Perak ,has been successfully organized in July. Part of this year’s programme include a road show on immunization. Jointly organized with state level Malaysian Medical Association, it was targeted at primary care doctors to create an awareness regarding the new Expanded Programme for Immunization. We managed to organize it
in three states so far and hope to continue this project in the other remaining states.

Another worthwhile project which should continue to cover as many unimmunised adolescents as possible. This year the Positive Parenting Seminar was held in Kota
Bharu, Kelantan, to a packed crowd of more than 400 participants. The book for parents titled `The Total Child` has been successfully completed and will be launched during our 25th anniversary celebration by Yg Berbahagia Datin Seri Dr Siti Hasmah Mohd Ali.This is all made possible through funding from a multinational company.

Working closely with the Ministry of Health has made some of MPA`s objectives achievable. One major step forward for MPA was the organization of the National Symposium on Adolescent Health with the Ministry of Health in January 2003.This was followed by a dialogue session where the MOH has agreed in principle to the formation of a ward specifically for adolescents. These adolescent wards will house adolescent patients from all specialties, and will be looked after by their respective doctors. We are also happy that a paediatrician has been sent for training in Adolescent Medicine.

This year’s souvenir book is a commitment by the MPA to document history. This is not the final version of the history of Paediatrics in Malaysia but it is a step in the right direction. History is important. Knowing what has been achieved makes it possible to chart the future.

Lastly I would like to congratulate Dato’ Dr Iean Hamzah Sendut and Prof Dr Zulkifli Ismail for completing this souvenir book – well done! Many thanks to the 2002-2003 MPA committee members, the organising committee of the Annual Congress and the 25th Anniversary Celebrations, the secretariat for all their tireless efforts in ensuring the smooth running of all our programmes and to all doctors and paramedical personnel who has contributed in making this 25th year of our society a truly memorable one.

It has been an honour and a pleasure to be the President of the MPA during our 25th Anniversary.